Father Brian Foos is the Headmaster of St. Andrew’s Academy, where he also teaches Literature and Composition, Philosophy, and Theology and is the choirmaster for the St. Andrew’s Academy Choir. He studied Bible at the undergraduate level, earned his Bachelor’s in Literature and Composition and his Master’s in Theology. He has taught mostly at the secondary and college levels.

This will be our principal Sunday service for the Third Sunday of Advent. Ambrose Charles Stuart Macias will be baptized by Father Foos, who with his wife Katie, will also serve as his Godparents.

St. Paul’s Anglican Church welcomes you in the name of Christ. We worship according to the 1928 Book of Common Prayer and adhere to the fullness of Scripture, the Historic Creeds, and the Thirty-nine Articles of Religion.

If you do not have a church home, we invite you to join us for worship each Sunday. Refreshments will be served in the Parish Hall immediately following the service this morning. All are cordially invited.

Father Brian Foos is a native Californian and spent the majority of his childhood amongst the trees and streams and lakes of Eastern Plumas County.  He is married to Kaitlin, another native Californian, and they have three young children.  Father Foos is the founding Rector St. Andrew’s Church and of Christ the Redeemer Church in Greenville, and he is the founding Headmaster of St. Andrew’s Academy. His schooling earned him an undergraduate degree in Literature and a graduate degree in theology and, apparently, a lifetime of teaching both subjects.  He is the choirmaster for St. Andrew’s Academy which keeps him involved in music which has been a passion of his since childhood.

He reads widely and slowly, enjoying many forms of literature, but particularly fiction, theology, and Church history.  He has edited and published various journals and rags, and in his younger days pursued writing, design, and layout with some enthusiasm and little financial success.

He prefers hiking in the woods and reading poetry by streams rather than fishing in them; basketball to baseball at all times; enjoys sailing and remembers waterskiing before it hurt so much to fall and still enjoys downhill snow-skiing on the old style boards from the ’80s (he gets laughed at on the slope).  He loves to travel and especially to infect his students with the same addiction as he shows them some of his favorite haunts in the British Isles and other European locales.

He is a lover of fine, handcrafted ales, appreciates a fine cigar, and enjoys being outdoors more than indoors, especially if he can sit and look at the lawn rather than mow it. 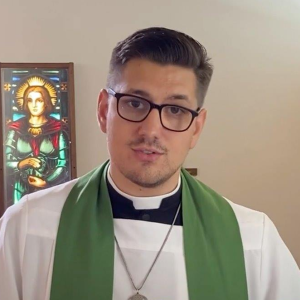 Steve Macias
Father Steve Macias is the Headmaster of Canterbury School and the Rector of Saint Paul’s Anglican Church. He is married to Sarah and the father to Athanasius, Anselm, Assumpta, Basil, Zoe and Ambrose.
read more